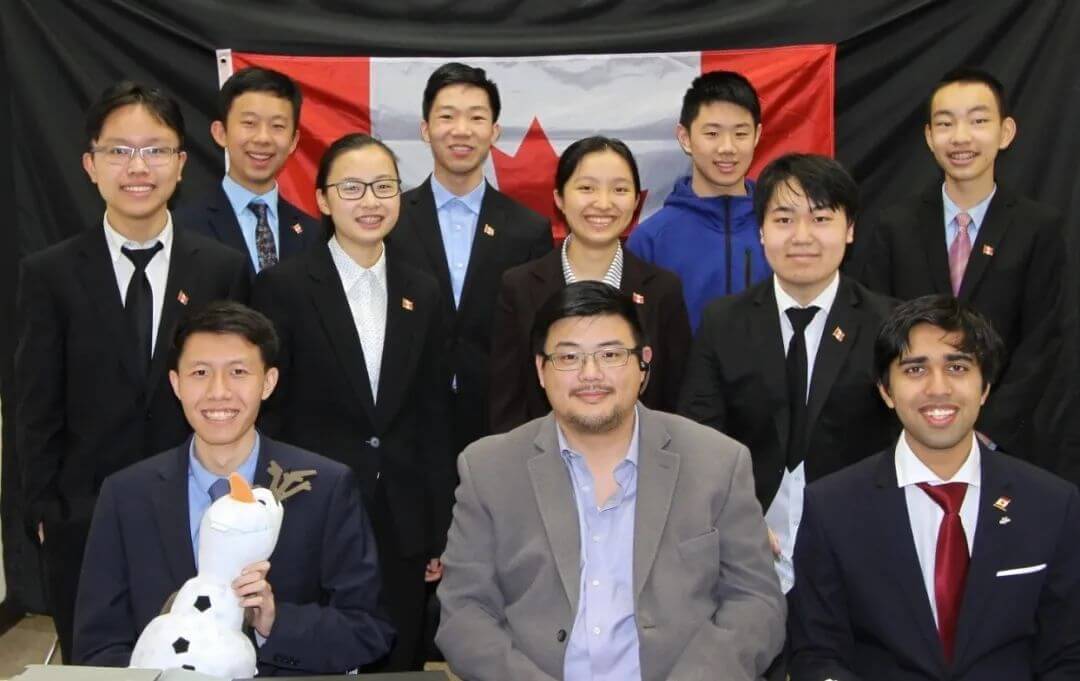 In the 33rd International Young Physicists’ Tournament IYPT held in September 2020, the Canadian team united and fought together to win the championship!

This year’s IYPT was hosted by Georgia It was held on September 4-7, 2020. It only took 5 years for Canadian team formed in 2016 to win the 29th IYPT championship this year. In these 5 years, teacher Ryan Ling and team leader and coach Jim Chen have contributed to the Canadian team’s results with extremely huge efforts and made outstanding contributions. This year’s assistant coach Dave Singh (2018 player, 2019 captain) has also done a lot of contribution through his practical and effective guidance and hard work. The five members of the Canadian team have all made long-term efforts and full preparations for this year’s competition, and they performed very well in the competition. The 5 students are: Daniel Yang, Martin Zhao, Tracy Zhang, Xiong Xiong Pei, Stone Yang. 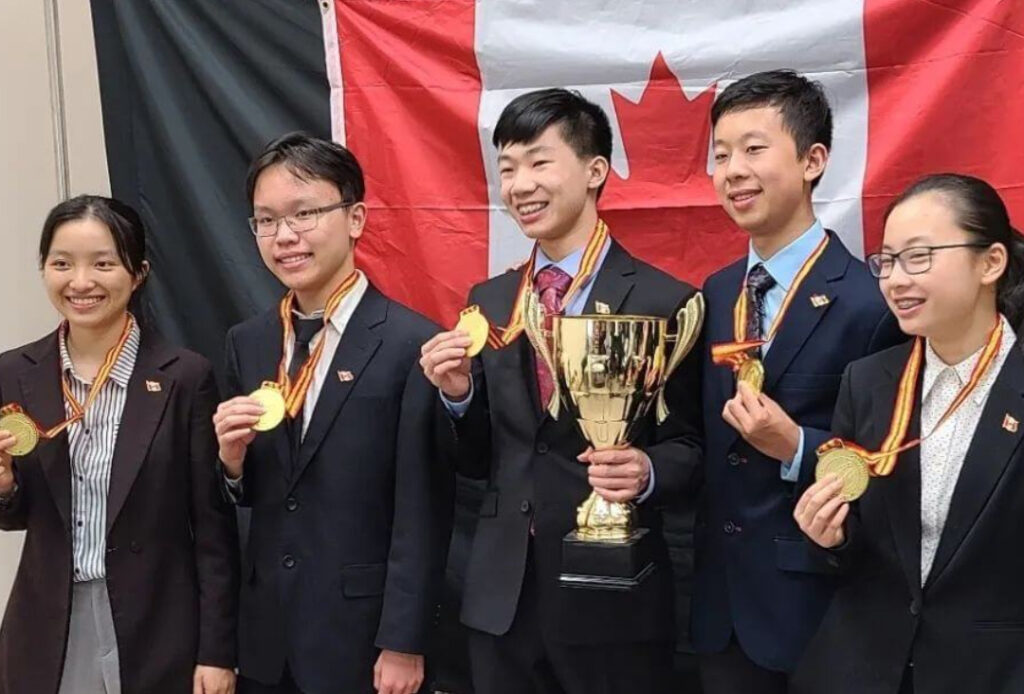 In addition, there are four observers who have been fighting with the team members. They are: Kevin Xie, Hector Chen, Dennis Lu, Kevin Liu. In this competition, the Canadian team maintained the first leading position in the five rounds of preliminaries. In the finals, they faced the challenges of the Chinese and Ukrainian teams, calmly dealt with them, played steadily, and finally won the championship! The hard work of the entire team have yielded fruitful results and achieved excellent results. Let us once again extend our heartfelt congratulations to them.

IYPT was also affected this year due to a global outbreak. In previous years, IYPT was held during the summer vacation in early July. But this year was postponed to September. In fact, not only IYPT, many international middle school student competitions such as the International Math Olympiad and the International Astronomy Olympiad are also postponed to September. And all of them canceled the original form of centralized face-to-face competitions in a certain country, and replaced them with remote competitions through the Internet. The participating players only compete in the same country together. Therefore this year’s competition is called Online-IYPT (O-IYPT).

Since it was held in September, it won more than two months for contestants from various countries to prepare. The Canadian team began selection in May and June. In July and August of the summer, when the epidemic situation improved, a training camp was organized and the competition was actively prepared.

All the members of the national training team and the team of coaches devote almost all of their time to the research of IYPT, working more than 70 hours a week at most. Three members of each research group collaborated to discuss experimental plans, make experimental devices, and experiment repeatedly. Sometimes dozens or even
hundreds of repetitions are needed to obtain more accurate data. And it is necessary to discover laws from a large amount of data, construct theoretical models and verify them.

As the game is approaching and time is tight, many team members simply set up camps at the Olympiads School in the IYPT training ground. All the 7 classrooms in Unit 336 of the Olympic School were used. In addition to the laboratory, 4 classrooms also became experimental sites. In another classroom, 5 air beds were placed in a lounge. In the generally very relaxed learning atmosphere in Canada, the coaches and team members of IYPT have shown that they are not afraid of hardship, unite and fight hard, which is even more commendable.

Teacher Ryan is the Chairman of the Organizing Committee of the Canadian Young Physicists’ Tournament CaYPT. He is responsible for the overall organization of the entire event, and provides guidance and support in many ways. The current team leader and coach Jim, as Canada’s only three consecutive participating players (two of them as captain), and the national team leader and coach for the past two years, is the executive officer of the competition organizing committee. A lot of creative work has been done to promote this event in Canada. For example, create a YouTube Channel to share experimental videos, create an online document library, set up training courses, and establish a training mechanism. In just a few years, Coach Jim has become the soul of the Canadian IYPT. Under the leadership of Coach Jim, the promotion and training of Canadian IYPT, domestic competitions, and the selection and training of national team members have formed a relatively complete system. 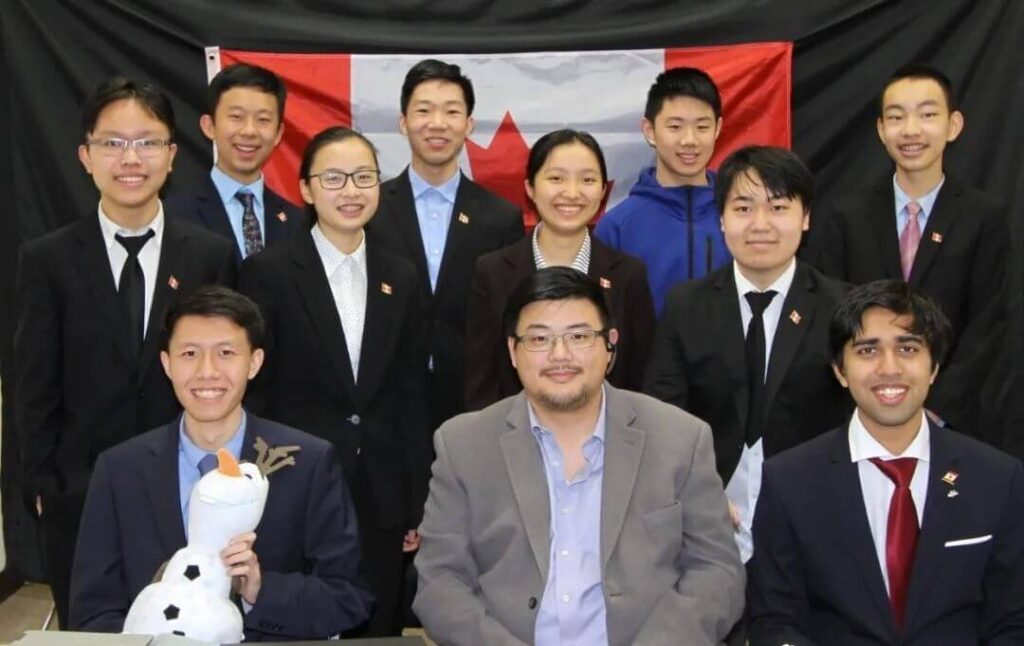 The Olympic School has consistently and strongly supported the IYPT activities. Not only provide training courses and increasingly sophisticated laboratories, but also invest a lot of money to support domestic competitions and purchase new experimental equipment every year. This year, for an experimental device for a competition problem, Olympiads School invested thousands of Canadian dollars to purchase two machine tools to process special parts, which greatly improved the accuracy of the experiment. It also laid the foundation for future players to increase
their experimental skills.

Of course, we should also thank the parents of all the Canadian team members, who provided solid logistical support for these team members to experiment and prepare for the competition. Parents take turns on duty and are responsible for the daily diet and daily life of the children. Today, all the hard work of the children and their parents has not only turned into excellent results in international competitions and the rapid growth and maturity of the children in a short period of time, but they have gained far more than that. The resulting keen interest in physics and natural sciences, the ability to analyze and solve complex problems, the ability of teamwork and academic discussion, and the spirit of exploring the unknown world and the spirit of scientific research, etc., are all The priceless gains will have a profound impact on their future learning, development and even their lives.

The second week of the IYPT training team seminar

International Young Physicists Tournament is the English name International Young Physicists’ Tournament, referred IYPT . The competition also has a name called “Physics World Cup” or “Physics Fight”. It was carried out between high school students around the world to team up as a unit (team-oriented) to debate the physics-content face to face in the form of tournament.

The IYPT Championship is a high-level competition in which contestants face complex physics issues to show their research methods, processes, results and conclusions, and discuss intense debates with their opponents on the spot. Therefore, it is called Physics Fights (PFs) in the competition. IYPT is held in different countries every year, and each country or region can only have one representative team, and each team has 5 people .

The basic rule of the competition is that for each game, there are 3 teams from the pros, the opposing side, and the review team, and each round has one question. Presentor team member positively demonstrates his own experimental plan, experimental results and theories (including photos of materials and equipment, experimental videos, data charts and theoretical formulas). The opponent team tries their best to find out the opponent’s various shortcomings and mistakes and denies them. The reviewers comments on both pros and cons. There are multiple back and forth in the whole process, which is quite intense, and the referees ask questions from all parties. This is a great challenge and exercise for the contestants in terms of experiment, theory, and debate. 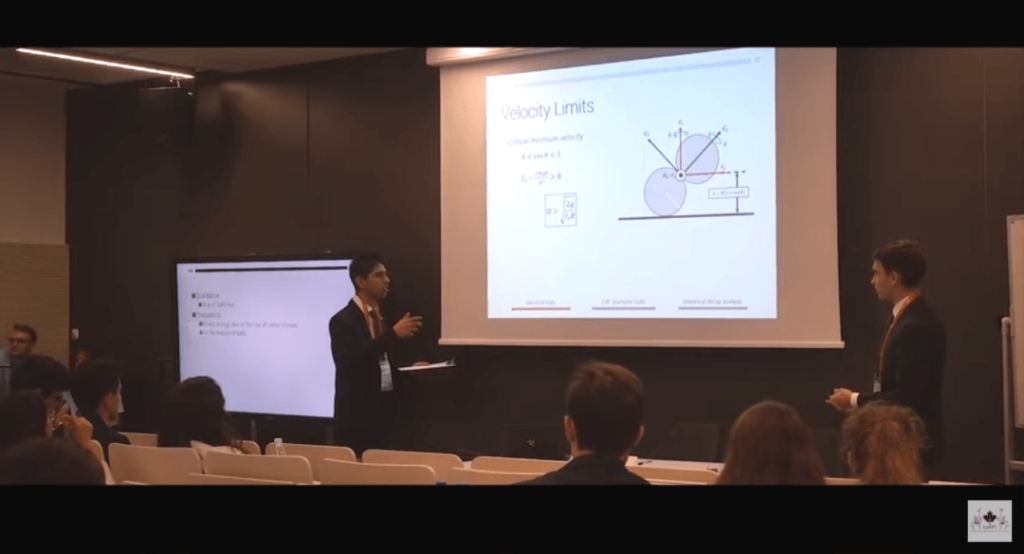 In 2019 IYPT, Canadian player Dave Singh Debating with members of the Belarusian team

The sponsor of IYPT is the International Organizing Committee, or IOC for short. IOC announces the competition questions for the next year in July each year. There are 17 questions per year. These topics are different from the International Physics Olympiad as they are not written answers or experimental questions, but a research topic. These topics of IYPT require nearly 10 months to a year to think about, put forward research ideas, make experimental devices, repeat experiments, collect and analyze data, verify quantitative theories, and launch competitions in the form of teamwork.

Therefore, IYPT is more challenging for high school students, and it exercises students’ ability to analyze and solve problems, practical skills, project organization skills, and the ability to cooperate with others. At the same time, IYPT gives those children who are introvert and not very good at expressing, and resist the test-taking form a lot of room for creativity, and also improves their comprehensive ability. 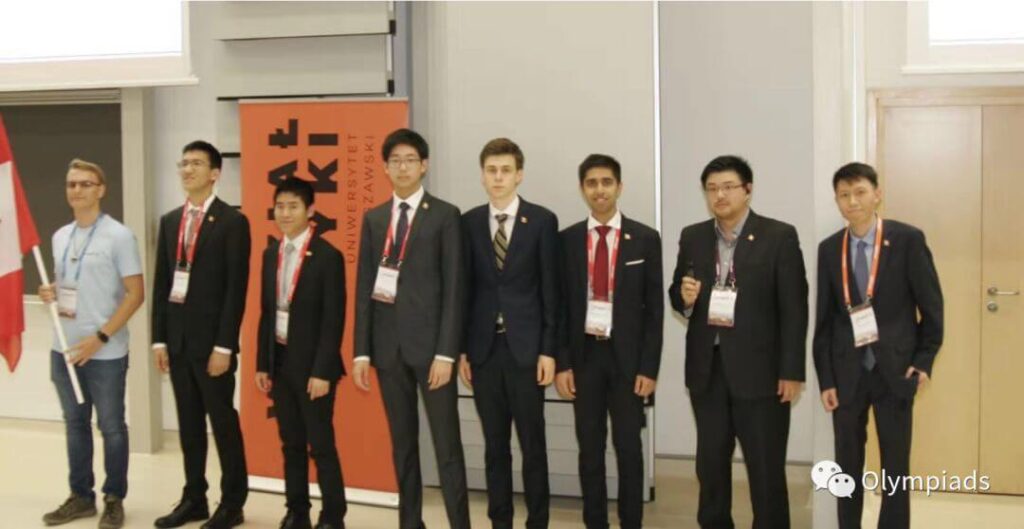 In the 32nd IYPT in 2019, the Canadian team won the bronze medal

This year’s IYPT is the fifth time that Canada has teamed up to participate. The first 3 times were teamed by the Olympiads School, who won the domestic competition and directly represented Canada in the competition. In 2017 and 2018, they won two bronze medals.

Starting in 2019, in order to give opportunities to more schools, Olympiad decided to abandon team formation. But the Olympiads School is willing to share the experience of the past years with more children. Therefore, training courses have been opened, and experimental equipment has been contributed to the preparation of laboratories, so that more high school students can get in touch with physics earlier and become interested in hands-on experiments. Not only can they show their talents through competitions, but also lay a good foundation for their future study and research.

Both the 2019 and 2020 IYPT Canadian national team completed training in the Olympiads School laboratory. Now, the Olympic School is the only training base for this event, attracting more and more high school students to come to study.

How to participate in International Young Physicists Championship

In Canada, if a child wants to participate in the International Young Physicists Championship, he needs to organize a team of 5 students inside or outside the school to study 10 physics topics in the domestic competition – Canadian Young Physicists’ Tournament (CaYPT) held every March. Players with outstanding performance in domestic competitions, high research level and high quality subjects are expected to be selected for the national team.

Beginning in 2019, the Canadian national team has adopted the method of selecting individuals rather than selecting teams. In this way, every player participating in the CaYPT, even if the team performance is not outstanding, but the individual performance is very good, it is still possible to enter the national training team.

The CaYPT organizing committee welcomes students who are interested in physics, like to think about problems and like to do experiments to actively participate in this activity! They will lead outstanding high school students to the international arena to show the demeanor of Canadian high school students!